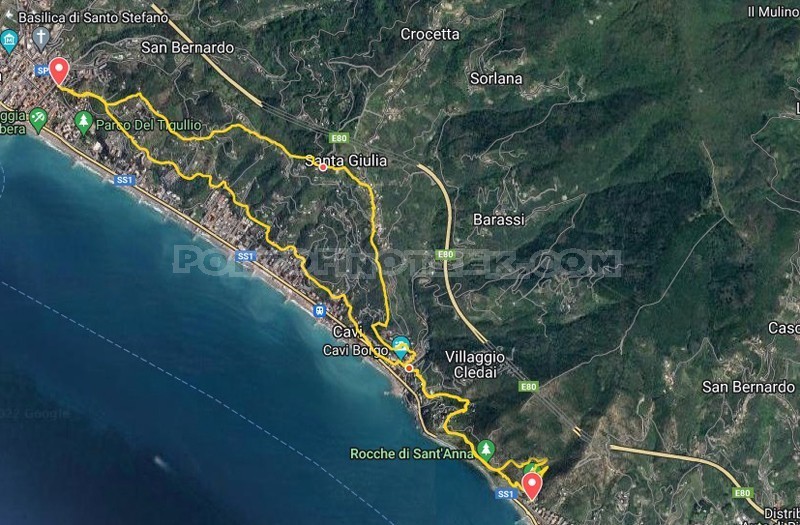 This trail starts in Lavagna in Via Monte, marked by the F.I.E. with a red circle

leading to Monte Capenardo. Immediately after about 400 meters you are in the middle of the countryside between cultivated strips and countless olive groves.
The route takes place all uphill and without major problems up to Santa Giulia which can be reached after about 40 minutes of walking.

Continue on the asphalted road, passing under the village church until you reach a path on the right (Via alla Chiesa), marked with the Liguria Trail sign.

, which connects shortly after in Via Costa starting to descend until you reach the "Chapel of San Michele di Centaura". Cross it and continue on the path, always straight. At a certain point he finds us in front of a fence and a gate that forces us to go down to the right, arriving on Via della Pineta.

Continue to the left on the paved road for about 400 meters where a staircase descends towards Cavi Borgo. Follow it by taking the right and you are in the middle of the small village.

Cross the road and right in front of it, between 2 walls, the uphill climb towards "Rocche di S. Anna" begins.

At the beginning the route crosses the asphalted road a couple of times, which you must also walk for a short distance, until you reach the panoramic path overlooking the sea that leads to the Rocche di Sant 'Anna, a highly suggestive location due to the presence of ruins of the ancient church of Sant 'Anna, a place of worship active until the early twentieth century.

Here there are two possibilities to go down to Sestri Levante, our itinerary continues to the left on the path called "dei Ponti" which after a series of pleasant hairpin bends reaches the bay, near a campsite (attention, this last part is also a path for MTB).
Sestri Levante is a welcoming and lively town where you can find all kinds of activities and services as well as beautiful beaches.
For those who do not want to return by feet, it is possible to come back to Lavagna by train or by bus.

The return starts following the more direct uphill path to "Rocche di S. Anna", which climbs steeply on stone rocks offering splendid views of the bay and in a few minutes and in just over 400 meters you will arrive at the crossroads encountered at the gone, where a table with wooden benches is placed.

From here continue on the same path but, this time with a view of the west coast, with Lavagna and the Promontory of Portofino to get back to Cavi di Lavagna; cross the village and continue on Via Aurelia for about 200 meters to climb the first stairs that start from the sidewalk and lead to Via Romana and then to Via Antica Romana.

This stretch is all on the paved road, but with very little traffic that crosses inland areas that are few known, offering various beautiful views of the sea and more generally of the Gulf of Tigullio.

Continuing on, you will find yourself on Via Tigula and then on Via Tedisio; here there is the possibility to cut 2 curves and, after the second with an ups and downs, keep right on Via Monte for a few meters, which allows you to reconnect to the path of the outward journey, returning after 400 meters to the starting point.