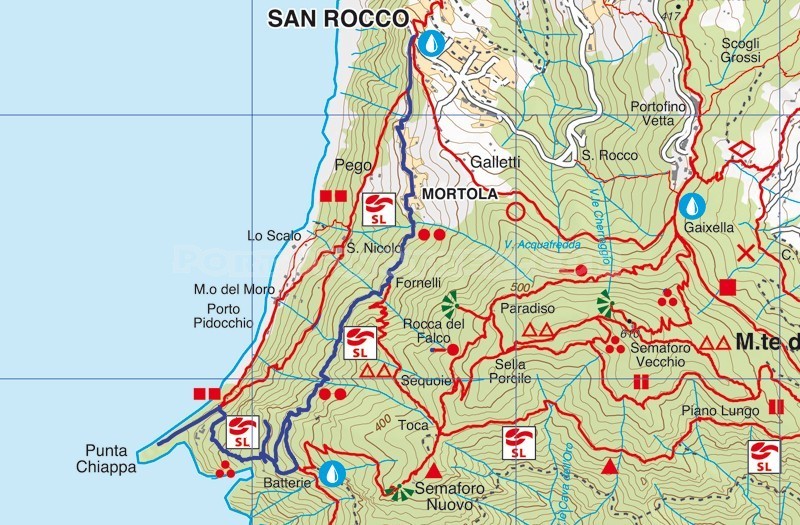 This time we propose the suggestive route which, descending among the remains of the bunkers, built by the Germans during the Second World War, arrives at Punta Chiappa. Plotted in 1941 to transport, through a monorail, the materials needed to build the 202° Batteria Punta Chiappa , with the end of the Second World War it was neglected and the vegetation took over.

In 2015 the path was included in a redevelopment and enhancement project for the entire area, it was restored and renamed "Hans Hill Trail", in memory of the German soldier who wrote a diary about his stay in this place during the war.

The starting point of our walk is San Rocco di Camogli , which can be reached either with your own car or motorbike (remember to park before the barrier that limits the passage to residents only), by bus or by foot from Camogli

Once you arrive in front of the church of San Rocco, a splendid panoramic terrace overlooking the Golfo Paradiso, continue walking along the path that runs along the sea. After a few minutes, having passed a first path that descends to Punta Chiappa (via San Niccolò), you will pass through Mortola , a small group of very characteristic houses.

After passing the village, you will encounter a few more houses and, on the left, a source of drinking water, then the path enters the wood and arrives, after about 20 minutes at Fornelli, where you must always continue straight . After a stretch on a false level, there are some ups and downs on irregular but easily passable rock steps and a short uphill stretch that leads you, out of the bush, to a highly panoramic point.

After about 40 minutes from the start you arrive in Groppo Marso, where you meet a first detour to Punta Chiappa, a path that after a few meters joins the one we have chosen and that you will find little more forward to Batteries .
Here you will find the Visitor Center "Silvio Somazzi " which, in addition to being equipped with technological systems and being able to be visited for free, organizes interesting guided tours to the military posts with the accompaniment of the Park guides.

After the first bunker you will meet the first of a series of detours that lead to "war artifacts", you continue to the left on the dirt path, always following the signs towards Punta Chiappa, the flat tongue of rock that emerges from the sea.

Almost the entire route is made up of sometimes high and rudimentary steps which, joined to a railing with chains , facilitate the descent avoiding slipping.
After the second position the path climbs to join the path coming from Groppo Marso and, continuing to the left, arrives near the bunker which from the sea can be clearly seen standing out in the middle of the vegetation.

Always keep left to go down, in the middle of a wood that offers some beautiful panoramic views of Camogli; past an old electrical substation, a short flat stretch anticipates the wooden ladder with which your itinerary ends, between Punta Chiappa , on the left and Porto Pidocchio , on the right.

Here the path traced by the GPS