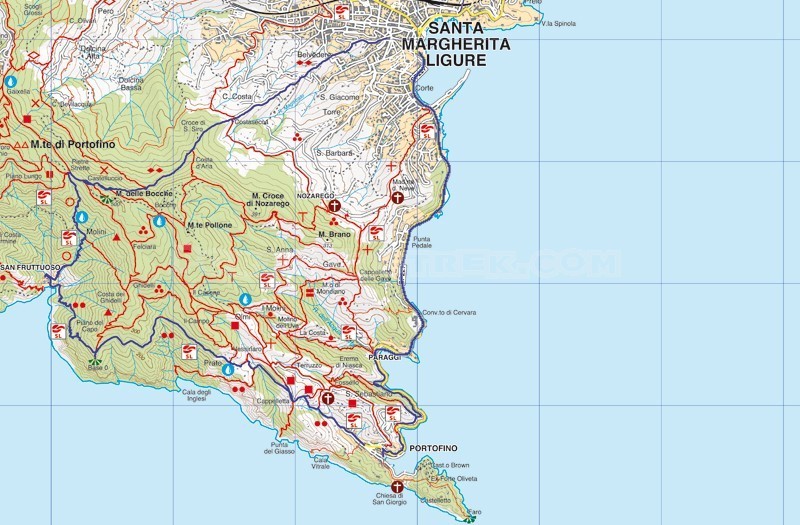 The medium-high difficulty assigned to this route refers above all to the very steep and tiring first stretch of climb that begins in Via del Fondaco near the Carabinieri station.

After passing the hotel, the road becomes a stairway that climbs up through the vegetation with large stone and concrete steps, very well maintained.
Once you have passed the branch for San Sebastiano and reached the in Cappelletta there is a wooden gate installed to prevent the entry of wild boars. Turning right, after 50 meters the path forks: continue left to reach Base 0 (220mt a.s.l.), and then San Fruttuoso (straight the path climbs towards Pietre Strette). The path, now narrower and flatter, winds on the western side of the promontory with a breathtaking view of the beautiful coves below; continue straight ahead ignoring after 10 minutes a detour to the left goes down to Cala degli Inglesi.

The path continues straight under the chestnut trees and after 5 minutes you enter, for a short distance, on a steep carriage road * which ends in front of some houses.

Take the path on the left that runs along the sea from above and alternates short flat stretches with numerous ups and downs in the midst of protruding rocks you arrive, after about 1 hour and 15 minutes from the start at Base 0 .

Base 0 was a military post during World War II of which an old ruined building remains, today it is a panoramic stopping point from which, turning right, you can reach Pietre Strette , going down to the left you will reach the San Fruttuoso Bay

This section of the path develops almost entirely in the woods and requires some attention because it is quite steep and the ground is irregular and covered with leaves that make it a little slippery.
The arrival in San Fruttuoso is at the helicopter landing base, from here you continue to the right going down among the fishermen's houses and passing under a "portico" you reach the first of two small enchanting bays.

After a well-deserved rest stop and after visiting the village, the climb that will lead to Pietre Strette begins; the path starts behind the Abbey and follows the direction towards Torra Andrea Doria which can be reached by a steep staircase

From here a small path immediately climbs very steep, entering a shady valley and following a stream. The hairpin bends then continue among the Ligurian "Fasce" and olive trees in a more sunny stretch, passing in front of the Agririfugio Molini .

After passing Casella , where there is a drinking water tap, the path goes back into the woods and in about 20 minutes it will reach the imposing rocky boulders of Pietre Strette (465mt above sea level), an important crossroads of Mount Portofino as well as a rest point equipped with tables, benches and drinking water.

Take the path towards Portofino and at the first fork take the path on the left; after about 5 minutes you will cross the path that descends to S. Margherita L. via Costasecca (

Very steep at the beginning, gradually the descent becomes less steep making the walk pleasant; after about 15 minutes you will arrive at the fork for Croce di San Siro (2 minutes), an old Cross erected in honor of the Saint of the same name in 1937.
Going down again after another 30 minutes you will reach the beginning of via Costasecca just behind the town hall.

Once you enter the center of Santa Margherita L. (do not miss a visit to the city) follow the direction of the sea and reach Piazza V. Veneto, from where you can decide whether to return to Portofino by public transport (from here both buses and boats leave for different destinations) or continue by feet along the coast road (about 6 Km).

We propose this last stretch along the carriage road because it is a very nice walk.

From Piazza Vittorio Veneto, staying on the seafront, cross the gardens to continue, then, in front of the fish market until you reach the entrance to the tourist port.

Continuing straight along the beaches, passing the Covo di Nord-Est disco, near the Abbazia la Cervara (above the road) begins a beautiful walkway overhanging the sea which, except for a brief interruption near Villa Bonomi Bolchini , continues (and ends) up to Paraggi.

After crossing the small village, take the shaded pedestrian above the road which in about 30 minutes will bring you back to Portofino .

* Section of road accessible to scooters and small vehicles, available only to the inhabitants of the area .