This route connects San Fruttuoso in San Rocco di Camogli is, in our opinion, the most evocative of the Park of Portofino but is also particularly challenging because of the presence of some steps on the rock overlooking the sea and the steep initial climb. It 'should bring along a good supply of water along the way because there are no sources. It should be noted also that some sections are very sunny.

The route begins at the pier, opposite the abbey. Go up along the stone steps to continue with a series of bends in the middle of a forest, where you can see some examples of beautiful pine trees. In about 30 minutes you are at the Valico of the Costa del Termine (257 m above sea level), near Punta Torretta.

From here a steep (and a little slippery cause of the leaves) down in a shady valley down to get over to Cala dell'Oro, a lovely bay that can be accessed only by boat. After crossing a stream in the dry (summer), begins the most extraordinary of the whole journey, where rocks of the Cape plunge into the deep blue sea below, creating a unique natural spectacle.

The trail, sometimes narrow and irregular, is "very challenging" due to some short sections (one, in particular, where it crosses a rock with few support points) above the sea, but the use of chains (at times may also superfluous), a good pair of shoes and a sufficient amount of caution make the crossing accessible to all (except for those with serious problems of dizziness).

The sight of Punta Chiappa under you pre-announces the arrival in locations Batterie (246 mt. Asl), a viewpoint which owes its name to the remains of the bunker of World War II.

Give up the coast, into the woods with some ups and downs, which are followed by a slight slope up to locations Fornelli (238 mt. Asl), where the path joins from the Toca locations (and Pietre Strette) and moves forward in a smooth between land that they cared more gradually as they approach the first houses.

Cross now the small village of Mortola, and straight on, ignoring the deviation to the left, on the walk to Punta Chiappa "sea view" to the scenic churchyard of St. Rocco di Camogli (here's a tap water , as well as shops and bars).

San Rocco di Camogli is connected to all other destinations by bus service. You can also go down in Camogli by feet (20 minutes).

The path traced by GPS on Google Maps 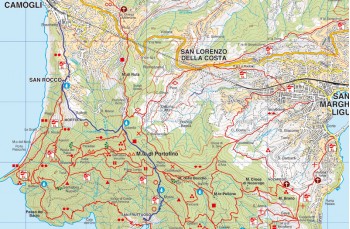