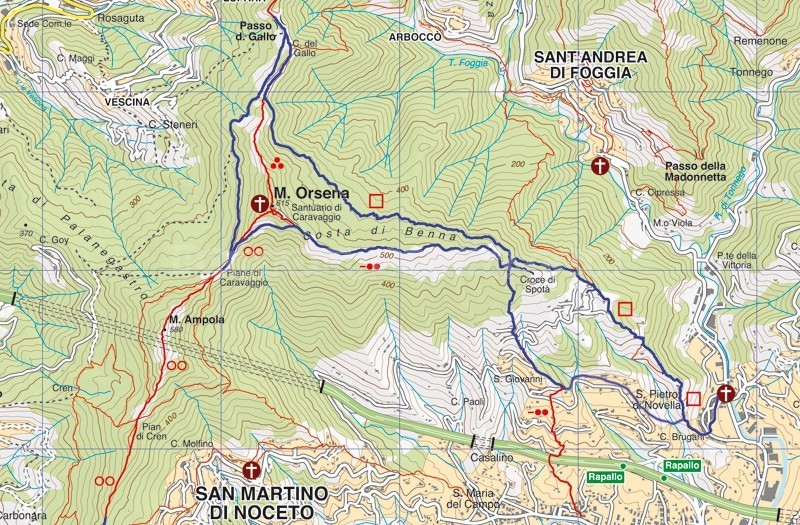 We are proposing this circular itinerary starting from San Pietro di Novella , a village of Rapallo (exiting the motorway toll booth, take the first turn on the left) which can also be reached by bus from the train station.

At the beginning the path is not marked and therefore, if you do not know the area, you have to pay a little attention: once you have passed the hospital you have to walk about 300 meters more until you find on the left Via Dondero, a small paved road that climbs towards some houses.

From here you start walking on the path, marked by an empty square

, which climbs into the woods, skirting some houses on the left until you'll reach a more open point that offers a panoramic view of Rapallo.

At a crossroads, keep to the right always following the empty square. The route now develops entirely in the woods on a path that is sometimes narrow and where in some points you have to climb over some trees that hinder the passage. All in all we found it in good condition and we had no difficulty in following it, unlike a few months ago which was impractical.

After about two hours you leave the damp and dark environment of the bush to find yourself in Colle del Gallo, a green plain from which you can admire, on the right, Rapallo and Monte Bello in front of you. A few more meters and you will arrive at Passo del Gallo , a large lawn where you can see the remains of ancient settlements and where a table with some benches has been placed; an excellent place to stop for lunch or simply to rest a little.

This, as you can see from the signal pole, is a crossroads of some paths, we have decided to go around Monte Orsena from the west following the two empty circles

returning towards Ruta di Camogli. pleasant and totally flat , offering some glimpses of the Golfo Paradiso and leading to the Piane di Caravaggio, another point where different paths converge. We take the road that goes up to the sanctuary to leave it after a few meters and continue to the right on the flat paved path that soon arrives at the helicopter landing pad.

Now we begin to descend (

) and at the crossroads between San Pietro di Novella and Santa Maria del Campo, we opt for this last option and keeping to the right.
Care must be taken because you descend on a partially bumpy stony path due to the continuous passage of wild boars.
After passing in front of the first houses, with some concrete steps you go down on the asphalted road that we follow until we find the old mule track on the left that cuts it and leads further down.
Here we take the asphalted road again. until you pass a pretty chapel on the left, and take another shortcut a few meters ahead that we follow to the left (going down to the right, instead, you get to Savagna and afterwards near the motorway exit) and passing through the woods it leads us to the starting point.

Click here for showing the path on the map