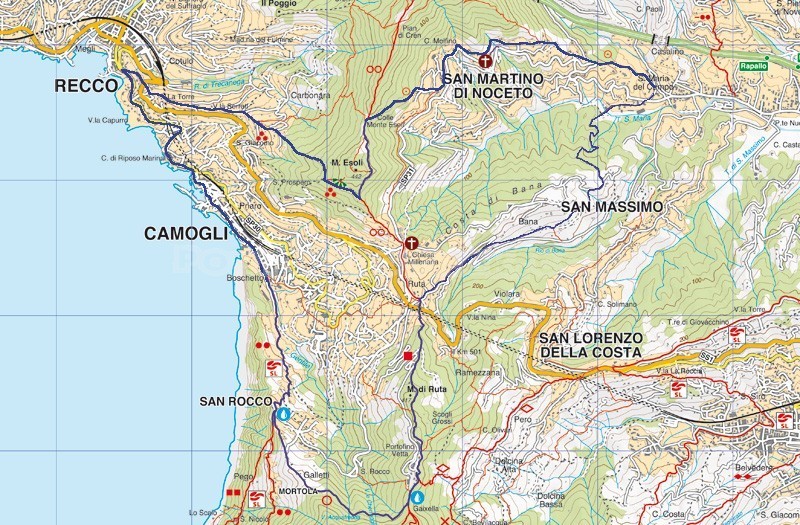 Here we propose a ring trail from Rapallo to reach Recco and Camogli, following paths between passages in the woods with more panoramic stretches.

The beginning of the route is near the parish church of Santa Maria del Campo, in Rapallo which can also be reached by public bus, in Via Cavagino a driveway which you follow uphill until you find on the right, a path goes up in the wood, with FIE trail sign

that leads on the main.
After a few meters uphill, leave it to proceed to the right and follow the paved road going up towards the houses, soon becoming a mule track that is somewhat bumpy at times due to the passage of wild boars.
Continue uphill until you reach a level path on the left which, passing behind an ancient villa, leads to the church of San Martino di Noceto.
From here, take Via della Fonte, a flat route parallel to the provincial road below and it allows you to admire the Fons Gemina, an ancient source dating back to 1810, from which there are two distinct springs.
Il sentiero prosegue sempre diritto, attraversando zone abitate e coltivate, fino a incrociare una strada asfaltata che si segue per pochi metri in discesa per ritrovare subito la traccia a destra che si mantiene fino ad incontrare Via dell'Acero, . This is an uphill stairway that initially runs alongside some houses, offering some notable glimpses of Rapallo, then enters the woods and, in about 20 minutes, comes out on the plain at Esoli Nord, an extremely panoramic location that deserves a stop.

From here, continue to the left on the flat and then begin to descend and after about 600 meters from Esoli north, turn right following the trail sign

. Continue on level ground along a path covered by holm oaks and arbutus trees to begin descending shortly after, starting the descent towards Recco.
When you leave the wood, beautiful views of the Golfo Paradiso open up until you reach Via Carbonara where there is also a new symbol to follow (

) which leads first to Salita Bastia and then to the main road, next to the municipal cemetery.

Here  you have to cross the road to take the one that continues in front, but we recommend paying close attention, you are on a curve and you don't have good visibility to see the vehicles arriving and unfortunately there is no nearby pedestrian crossing.

Once you have crossed it, continue on Via San Francesco which, in about 200 metres, ends up in front of the San Francesco residence on Via Romagneno in Recco.
There are no paths from here to Camogli, so you follow the driveway which, being with little traffic and with a panoramic view, proves to be a pleasant route which, after 1.2km past the cemetery, with a detour to the right ends in the quaint little port of Camogli.

After a recommended stop in the renowned Ligurian town, the journey continues following the seafront, and after crossing the parking lot, on the right, the indications for the Portofino Park guide the climb towards San Rocco di Camogli.
It is a mule track, made up almost entirely of steps, which crosses a peasant area with cultivated terraces and rural houses and after about 30 minutes it comes out in front of the church of San Rocco di Camogli.
Here we point out a drinking water tap.

Now take the path that goes up beside the church in the direction of Gaixella-Portofino Vetta, which, after passing through Galletti, is characterized by the stages of the Via Crucis and reaches a small area where a votive aedicule stands and then enters a wood and arrives in the locality Gaixella, where there is another drinking water tap.
From here, continue to the left, and after going around the Kulm hotel in Portofino Vetta, the descent begins which ends in Ruta di Camogli in about 20 minutes.

To return to the starting point, follow the narrow driveway to the right going down to Bana, until you come to some steps on the right after about 200 metres, which go down the underpass to meet the ancient Via Romana. Initially the trail is a bit overgrown but becomes more pleasant as you descend.

After crossing the driveway, take the downhill path again walking just above the paved road until it meets Via Santa Maria.
We now go alongside some houses and a rustic house with an interesting painting above the portal.
A few glimpses of San Massimo open up, coming alongside the paved road of Via Bana. When the path joins the road, cross it by taking the path on the left which runs alongside a private property continuing into the woods.

After about 300 meters of walking in the woods you have to go down to the right and not go straight on as it would be natural to do; sadly there are no signs to help at this point. In 15 minutes you will find yourself at the stables of Santa Maria del Campo, from where you will soon reach the main road and, passing behind the church, you will find yourself at the starting point.