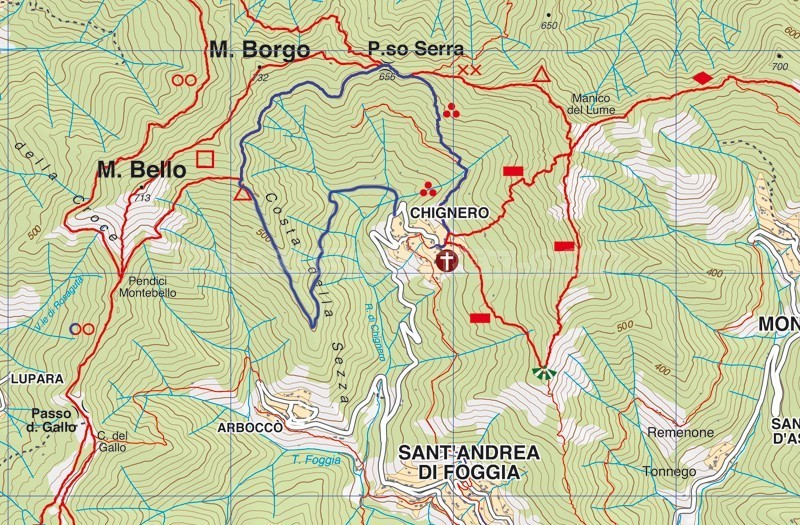 The itinerary that we propose here develops, in part, on paths rediscovered and cleaned by a group of volunteers, not yet formalized with the trail signs by F.I.E, and which have some passages on rocks NOT suitable for all hikers.
We also advise against walking it in the opposite direction and when the ground is wet.

The departure is from Chignero , the oldest hamlet of Rapallo, which is 5 kilometers away from the motorway exit and can be reached by private transport (possibly scooter because it does not have many parking spaces) or by local busses (the service is not active on public holidays, sundays included).

Just before arriving at the church, when the road becomes flat and near a small stone house built on the right side of the road, a red arrow is clearly visible which invites you to go down to the left into the woods.
The path is well maintained and after a short descent, it continues flat, crossing a territory once inhabited and cultivated as can be deduced from the presence of dry stone walls and the remains of old stone houses, also offering some interesting panoramic glimpses of the small village of Chignero and Rapallo.

After crossing a small but suggestive stream, the path climbs with some slightly bumpy passage and arrives at a crossroads where you will continue to the right (on the left you go down to Arbocò) following the signs to the Passo dei Grifoni, so called because it seems that once upon a time the raptors of the same name nested here.

The path now follows the ridge and is highlighted by temporary red ribbons placed on the trees. As you go up the view becomes more and more open and spectacular, here some stretches that could be a bit challenging due to the slope and rocky terrain.
Along the ascent there is a second deviation, to the left towards Passo del Gallo which must be ignored to continue climbing straight ahead.
In about 30 minutes the path reaches the slopes of Monte Borgo crossing the path that connects the slopes of Monte Bello to Passo Serra.

Continue to the right on the narrow path which advances on the flat, in about 20 minutes you will arrive at Passo Serra , as you can well guess from the indications of the FIE association on the rock.
From here take the beautiful path on the right characterized by large slabs of stones which descends towards Chignero and in about 20 minutes, then crosses a beautiful wood to end up behind the church of Chignero.

To get to the starting point you can continue along the paved road for about 300 meters or take the stairs next to the church which, descending and crossing part of the town, will take you to the driveway, right in front of a pink house. Going up to the right after about a hundred meters you will return to the small stone house taken as a reference for the departure.