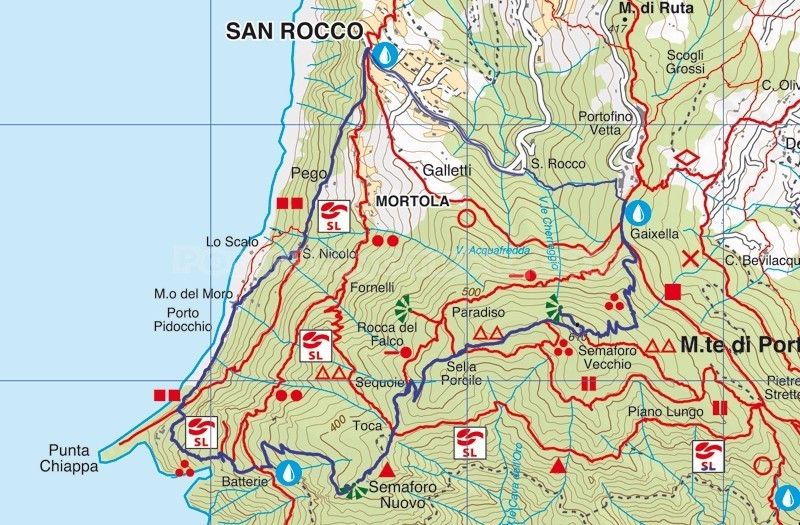 A ring trail starting from San Rocco di Camogli touches some of the main places of the Park of Portofino, partly along less traveled paths.

).
It is a path immersed in the woods that initially runs alongside a stream and then continues with a stone staircase consisting of 600 steps, which in about 20 minutes leads you under the Portofino Vetta antenna.

From here, follow the main path to the right towards Pietre Strette up to Gaixella (there is a drinking water faucet here), after about 50 meters you'll arrive to a fork: here continue on the path that climbs towards Semaforo Vecchio , marked with

A beautiful shady path characterized by some rocky boulders that climbs in part in hairpin bends, until it reaches in about 35 minutes, the highest point of the Portofino Park (610 meters above sea level), where the Semaforo Vecchio with a beautiful lawn in front of it, now used as a refuge.
The presence of some tables with wooden benches placed on the sides of the lawn make it a perfect place for a picnic.

After a recommended short detour to the natural panoramic terrace "Frank Sinatra" , which rises behind the refuge, you resume your journey taking the path marked by

which arrives in Sella Porcile. after crossing a more humid area as can also be seen by the presence of many ferns. From here, continuing straight on, you descend towards Toca a crossroads of paths where there are two tables with wooden benches.

The direction to Semaforo Nuovo is well signposted and can be reached with a short 10 minute walk.
The view from here is simply amazing, also ideal for enjoying breathtaking sunsets..

The descent begins here, marked with

, which leads to Batterie with a narrow path that overlooks the Golfo Paradiso and offers suggestive views of Monte Campana.
In about 20 minutes you can reach the first bunkers dating back to World War II and the Battery Visitor Center, next to which there is also a drinking water faucet.

Now the path descends steeper in the Mediterranean scrub following the original path traced by the German military that runs alongside the war installations; with steps, at times irregular but equipped with chains fixed to help the descent, you will arrive Punta Chiappa, where you can swim and enjoy fresh fish in the two restaurants on site.

Walking along the beautiful picturesque promenade on the sea that passes from Porto Pidocchio , where the boat dock is also located, you arrive at a small group of houses from where a concrete staircase consisting of 1000 steps starts and which leads to the Church of San Nicolò di Capodimonte (considered one of the oldest Abbeys in Liguria) and therefore to San Rocco di Camogli, from where following the driveway you will soon return to the starting point.

Our itinerary route by GPS