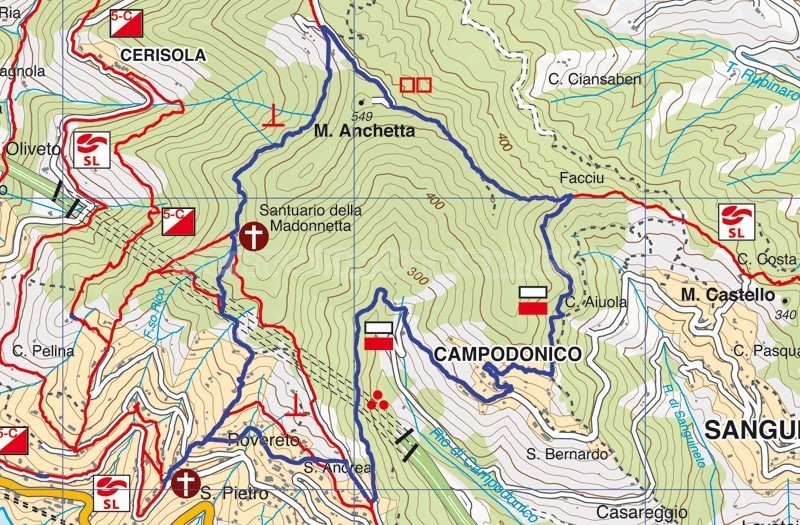 This route starts from San Pietro di Rovereto, a small fraction of Zoagli that does not have many parking spaces so we recommend arriving by scooter or by feet from Zoagli following the first part of the "5 campanili" trail.

Take the path to the left of the church which climbs and merges into Via Longarola , follow it until in front of the first house you meet, a path starts on your right and runs flat towards Sant 'Andrea di Rovereto .
A beautiful flat path initially cemented to then become a grassy path, with a spectacular view of the Portofino Promontory and the Gulf of Tigullio, which passes over the church of Sant 'Andrea di Rovereto and then flows onto a gravel road that go along for about 400 meters until you meet the path coming from Chiavari.

(turning on the left instead you will arrive at the Sanctuary of the Madonnetta).
Here a very pleasant path begins almost entirely flat or with some ups and downs in which it crosses woods and cultivated land flanked by old cottages often abandoned and unsafe that leads us to the hamlet of Campodonico .

On the left, before the church, you immediately notice a concrete staircase which begins to rise and which allows us to cross the oldest part of this pretty hamlet; after having crossed some cultivated fields and admired a beautiful panorama over the whole Gulf of Tigullio, we arrive at a crossroads; to the right you go down to San Bernardo, you continue to the left and to cross the Montallegro - Chiavari path after about 1 km. Follow it for a few meters towards Chiavari (going down to the right) to stop at "Baita Facciu" , a cozy wooden house made available to hikers (very useful in case of rain) by the owner.

After the stop, resume the path by returning to the path but this time keeping the direction for Montallegro marked by

; the next stop is the Anchetta Pass, which it reaches after about 25 minutes (the last 300 meters are on a paved road).

Now turn left and take the path that descends and leads in about 15 minutes to the Sanctuary of the Madonnetta ; at this point, instead of going down to the left of the church, we decided to go down vertically towards Zoagli until we get to a hunting post located at the top right going down (easy to identify, it is composed of innocent pipes as a raised position about ten meters above the ground).
Here, turn left to follow a connecting path which after about 300 meters joins the path "Anchetta - San Pietro" ; stay on the path that after a while begins to descend quite steeply, passing in front of the concrete path taken on the outward journey (which we now find on our left), and finish in the churchyard of San Pietro di Rovereto.