Trail without particular difficulties and suitable for everyone.

This itinerary with departure and arrival in Santa Margherita Ligure, is very panoramic and crosses some of the most characteristic places of the Park of Portofino but it is equally long and demanding. For this reason, in the description we suggest two alternatives for returning to the starting point, for those wishing to interrupt the route in advance.

The route starts at locality named "Corte" in Santa Margherita Ligure , with rose Montebello , a small street opposite the entrance to the marina (behind the gas station).

The road that for the first short stretch is open to cars and motorbikes becomes a mule track that climbs through high fence walls and, after a stretch in the middle of the countryside, reaches Nozarego ( 149mt. Above sea level), at the chapel of the Madonna della Neve , from which you can enjoy a fantastic view. 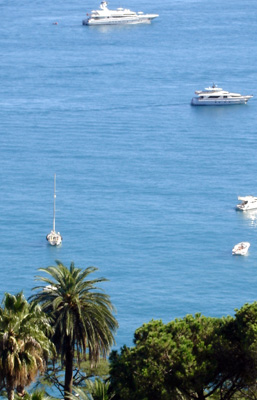 After a few meters on the driveway, the route continues to the left on the cobblestone that climbs to join the path coming from the church of Nozarego and, after a flat stretch, reaches the Cappelletta delle Gave (168 m. asl), from which several branches leave for other paths.

Keeping to the left, a steep descent passes under the chapel (here there is a tap of drinking water) to emerge, after about 20 ', at Paraggi on the carriage road, which must be followed (towards Portofino) for a few meters that will lead you to take the staircase that gives access to the pedestrian Paraggi-Portofino (recently named "The walk of kisses").

The walk that connects the two prestigious villages is very pleasant because it offers the same panoramic views of the underlying carriage road but is completely immersed in the green of the Promontory.

Once you reach the parish church of Portofino (with yellow and gray stripes) it will be necessary to go to the end of the car park, near the police station, and take via del Fondaco , the road that after a few meters becomes a steep (and tiring) stairway that goes up surrounded by the Mediterranean scrub.

After about 10 'you will arrive in Palara , in front of a gate which, as you learn from the sign, has been placed to prevent access to wild animals, (therefore we recommend closing it after passing through) and continue meeting another one in Cappelletta , where you have to turn right.

After 50 minutes when you meet forking, the path continues on the left, narrower and flatter, towards Base 0.

After Vessinaro (190 m. Above sea level) the detour to Cala degli Inglesi, after a stretch shaded by chestnut trees, continue on a steep, but short, climb on a carriage road that ends in front of some houses.

From here the path continues to the left, alternating flat sections with some ups and downs between protruding conglomerate boulders (Puddinga), totally overlooking the sea (in summer it is very sunny) and the numerous coves below. 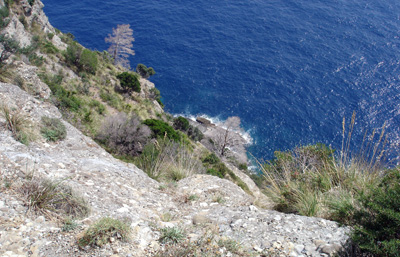 Arriving at Base 0 (220 meters above sea level), an ancient military position, today a stopping point equipped with some tree trunks and a wonderful view point, the descent begins towards San Fruttuoso di Camogli , which you gradually begin to glimpse among the trees.

The descent, in some parts quite steep and uneven, winds through a shady forest offering various panoramic points over the village and the ancient abbey which, as you descend, become more and more exciting.

The path ends directly on the helicopter landing platform, from which, passing through the fishermen's houses, you can access the beaches and the spectacular abbey of San Fruttuoso.

Before resuming the journey it is advisable to stop and get some water (the first tap of drinking water will meet in San Rocco di Camogli).

The route restarts at the pier, in front of the abbey, with a series of steps followed by hairpin bends which, going up in the middle of a wood where you can admire some specimens of magnificent old pine trees, in about 30 minutes lead to the < strong> Pass of the Costa del Termine (257 mt. above sea level), near Punta Torretta .

From here with a steep (and a bit slippery due to the leaves) descent into a shady valley you reach above Cala dell'Oro , a delightful bay which can only be accessed by boat. After crossing a dry brook (in summer), the most suggestive part of the whole itinerary begins, where the rocks of the Promontory plunge into the intense blue of the sea below creating an inimitable natural spectacle. 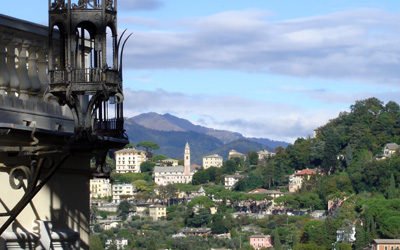 The path, sometimes narrow and irregular, is defined as "very challenging" due to some short stretches (one, in particular, where it passes through a rock with a few points of support) overhanging the sea; but the use of chains (sometimes superfluous), a good pair of shoes and a sufficient dose of prudence make the crossing accessible to everyone (except for those who have serious vertigo problems).

The view of Punta Chiappa below us announces the approach of Batterie (246 m. Above sea level), a lookout which owes its name to the remains of the bunkers of the Second World War.

We now leave the coast to go into the bush with some ups and downs, followed by a slight slope up to Fornelli (238 meters above sea level) in an easy way between lands that become more cared for as you go near the first houses.

Go through the small village of Mortola , pass the detour to the left for Punta Chiappa and continue on the "sea view" walk to the panoramic churchyard of San Rocco di Camogli Church (here is a drinking water tap, as well as shops and bars).

From San Rocco di Camogli there are two possibilities to return to Santa Margherita Ligure: by bus (connection to Ruta di Camogli), or by train going down to Camogli (here the path Camogli - San Rocco).

The staircase that we see on our right next to the Church is the path that leads to Portofino Vetta (and then descends to Santa Margherita Ligure); the mule track, an ancient via crucis (as can be seen from the ceramics on the facades of the houses and a small altar), crosses the built-up area of Galletti and cultivated strips to then go into the bush to Gaixella (412 m. Above sea level) (point equipped with tables, benches and tap), where it joins the main path Portofino Vetta - Portofino. 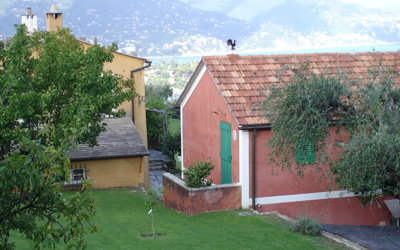 Turning to the right, the wide and easy path in about 15 'arrives at Pietre Strette (464 m. Above sea level), a crossroads of numerous paths and a point equipped with benches tables and drinking water tap.

Still following the direction "Portofino Mare" after another 10 minutes, on the left, we meet the descent which in about 50 minutes comes out in Santa Margherita Ligure , next to the old hospital.

The first part of the path in the middle of the woods is irregular and steep but, once you pass the Costa d 'Aria , at the level of the detour to Nozarego, the path becomes easier and goes down passing by beautiful villas and manicured gardens, offering beautiful panoramic views of Santa Margherita Ligure.

The GPS path on Google maps