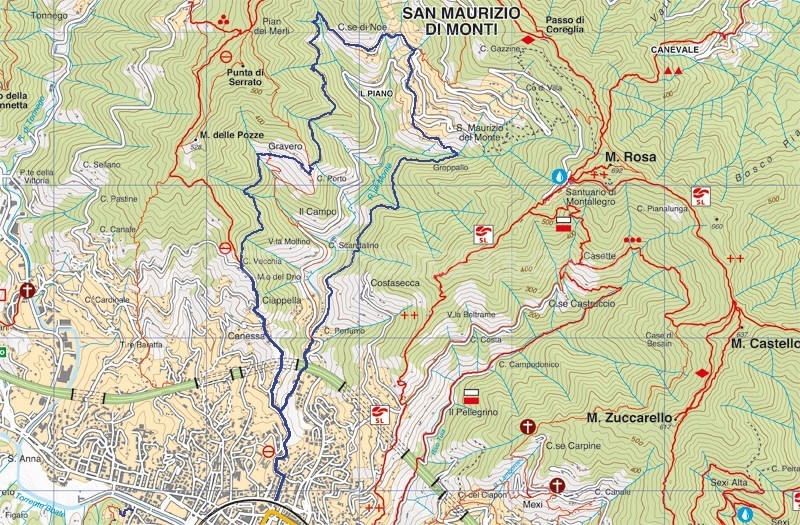 This itinerary takes place on a partly unpublished and unsigned path not recommended for all hikers as some passages can be a bit difficult.

The starting point is in Rapallo in Salita S. Agostino , just behind the railway station; you begin to climb along the paved road, following the crossed out circle as a signpost

and at the end of the climb, turn left onto the same road which immediately becomes pedestrian and after a while it continues going up and passing over the Rapallo cemetery and then behind the " Guardastelle " district .
Continue passing through a tiny nucleus of houses arriving at S. Agostino , easily recognizable by the cute little white church.

The path continues to the right of the church to go up among olive trees, small cultivated fields and some scattered houses.
When you come out of the vegetation, a beautiful view of Rapallo opens up.
After about 200 meters you arrive at Madonna Nera where you can see a small chapel built on a private property.
A last flight of stairs leads to the terminal part of Via dei Poggi which runs for about 100 meters, then proceeds to the right into the woods and always follows the same signpost for about thirty meters until a small path branches off to the right which continues flat, towards Gravero .

The path, made of continuous ups and downs, even if not particularly scenic, is pleasant and in a beautiful wood. At a certain point you are guided by the water pipe and in about 30 minutes you will arrive at the abandoned village of Gravero.

Here you have to pay attention to take the right path because it is not marked and quite hidden. In fact, after having passed the abandoned cottages and before starting to descend, it is possible to see on the left a tie that reaches the ground, a few meters above the path (currently signaled by a signaling tape, but it could come off in the future); you climb right here crossing some small cultivated fields and connected to each other by ancient stone stairs, until you cross a path that goes up (not too visible) and a flat path to the right that you follow to arrive in a short time in a more open point with a nice view on Rapallo.

The path practically always follows flat, almost entirely in the bush, with some ups and downs and some points where you have to pay a little more attention because it can be slippery, especially on wet ground. As soon as you leave the wood you have a beautiful view of: Case di Noè, S. Maurizio dei Monti and the Sanctuary of Montallegro at the top of the mountain. .

This heralds the arrival at the destination, the wood gives way first to cultivated strips and then to some inhabited houses. The path becomes concrete until after about 200 meters you'll reach the pretty village of Case di Noè .

Follow the driveway until you reach under the Rapallo - Montallegro road, where you can see a wide path that descends on the right.
You have to go all the way up to intersect the driveway again, near a covered garage. Here you continue for about a hundred meters until you find on the right the ancient mule track which is part of the ancient Via del Sale (Salita al Groppallo).
You go down until you'll reach the Milling complex of S. Maurizio dei Monti seat of the museum of peasant culture, which can be visited by appointment only.

Here the route is clear and simple and takes you to cross Via Betti in about twenty minutes .

Cross the road and just to the left of the bus stop, take Via delle Cave which after about 300 meters crosses Salita S. Agostino , the same route as the outward journey, but that now we go down to find ourselves, after about 15 minutes, at the starting point.