Tour of the 5 towers in Chiavari 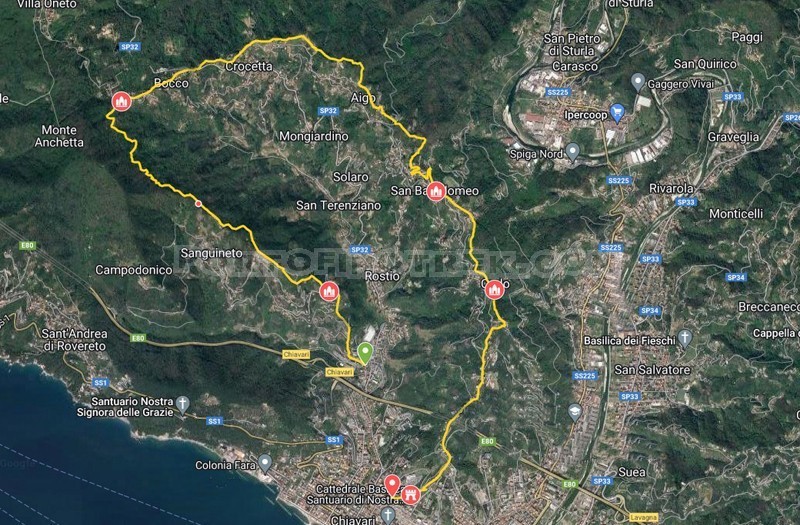 Trail without particular difficulties and suitable for everyone.

This itinerary is a very popular ring circuit on the Chiavari hills which, for no specific reason, we decide to go clockwise rather than counterclockwise as usually proposed. The name 5 Towers (5 Torri) comes from the fact that, along the way, there are 4 bell towers and the medieval tower of the Chiavari Castle.

The departure is from San Pier di Canne and to be precise in "Via per Maixena" which we walk for about 300 meters where we see on the right the starting point of the path marked with 2 blocked red lines.
The beginning consists of a very steep staircase which, crossing cultivated and inhabited rural areas and leads us to the church of Maixena , the first bell tower of our route.

You continue to climb following the signpost, the path is pleasant and crosses the countryside of the Chiavari hills until you reach the "Case Costa" locality, a characteristic and picturesque village (and private property) where you can find also a drinking water tap. Continuing, after about 300 meters you will arrive in Vic. Costa di Campodonico where you turn right towards Leivi.

The path is now mostly flat, made up of not demanding ups and downs, by now the altitude has been reached and winds through chestnut woods until it reaches a dirt road that takes us to the pretty Church of San Lorenzo (the second bell tower of the tour).

We arrived in the municipality of Leivi. Now the route continues on the asphalted road, Via San Lorenzo which takes us to Via San Rufino (which begins with a slight slope), in the locality of Bocco di Leivi, which you follow for about 800 meters before seeing our trail sign on the left (not so visible) that finally makes us leave the road and makes us climb a hill with wonderful meadows.

We continue straight, we pass in front of a private villa and immediately after, we take a small path above the road that makes us pass behind a nucleus of inhabited cottages. Here we take the Via dei Boschi up to San Bartolomeo where we find the beautiful church and the third bell tower.

We continue following the usual signpost and at the fork we chose the path on the right that takes us up to Curlo with its beautiful church of San Tommaso and the fourth bell tower of the tour.

From here the path continues downhill, alternating passages on a path and at times on a paved driveway and, always following the trail sign

, you arrive at "Case Sparse di Ri Alto" and then in "Località vicinale della Picettina". If you want here, you can take the path that goes down to the right and marked by the

footpath which leads back to San Pier di Canne a few meters from the starting point of this trail.

We continue to descend until we reach the Chiavari Castle, a beautiful stone structure built between the years 1146 and 1147.
After a few minutes we arrive in the center of Chiavari where the itinerary ends.