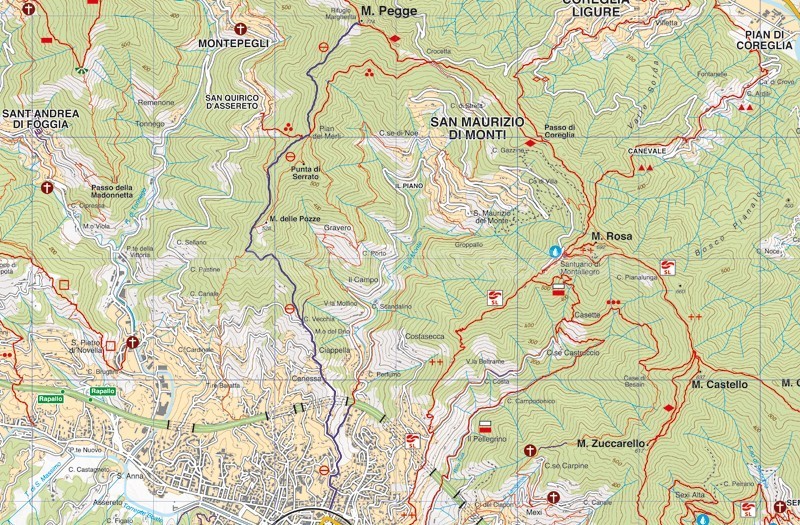 This trail starts from Salita S. Agostino in Rapallo, just behind the railway station where it'll possible to see this sign

Follow the paved road that climbs quite steeply and when you reach the top, turn left and continue on the pedestrian path which continues climbing and passing over the Rapallo cemetery and then behind the quiet district called Guardastelle.

After passing through a tiny group of houses, the path arrives in the locality of S. Agostino, easily recognizable by the cute little white church. The path continues to the right of the church and climbs again in the midst of olive trees, cultivated strips and some scattered houses. When you come out of the vegetation, looking back, you can admire the beautiful view over the Rapallo bay. After about 200 meters you will arrive at Madonna Nera where there is a small hidden chapel built on a private property. A last flight of steps leads to the end of Via dei Poggi which is left out after a few meters to continue in the woods.
At the crossroads, keep left, always following the same signpost.

The path climbs in a beautiful chestnut wood for about twenty minutes up to the slopes of Monte delle Pozze , then continues more level on what is called Strada vicinale delle Pozze arriving at Pian dei Merli or Passo di San Quirico (from here, in fact, in 15 minutes it is possible to go down to the left towards the homonymous hamlet of Rapallo ) where there is a beautiful lawn and what remains of two old stone cottages.
After a few meters you will come to a fork, both paths lead to Monte Pegge (the one on the right takes you to Passo del Crocetta and from here you reach the summit), but we keep to the left, always following the crossed out circle sign.

The initially flat path crosses the bush and leads to the western side, then gradually begins to climb on rocky terrain and offers a very open view of Rapallo and the surrounding peaks.
A last slightly more demanding passage precedes the arrival at Monte Pegge (775mt. Asl), where the Margherita Refuge stands, a shelter for hikers, open all year round, managed by the Alpine troops of Rapallo.

Monte Pegge is a strategic point that allows you to continue in different directions.