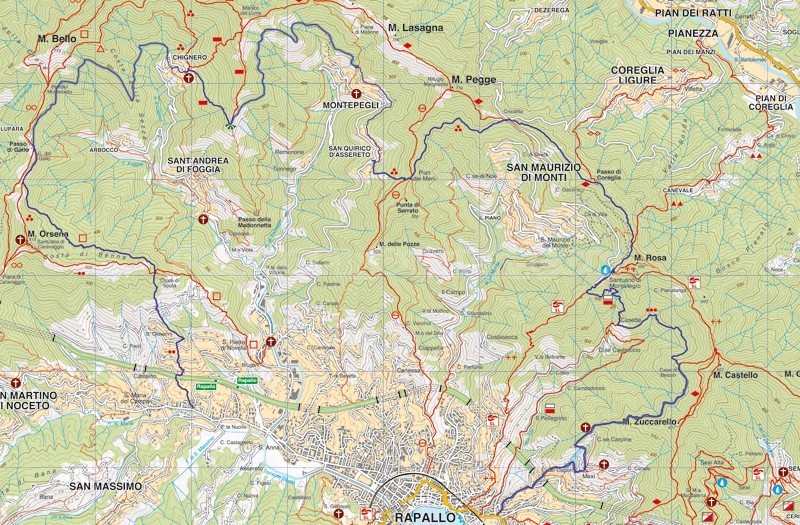 The "Trail du giamin" is an itinerary conceived by a group of passionate hikers and so called because it crosses some hamlets of Rapallo where once the peasants worked the land with hard work and passion (from the Genoese dialect "giaminà" = to work with effort).

It is a long route without water sources (with the exception of Montallegro), so it is recommended:

- a correct preparation causes the length of the route and some passages a little more demanding.
- an adequate water supply (minimum 2 liters per person).
- avoid the winter period when the days they are shorter.

The starting point is in Rapallo, in Via Aurelia di levante where you take Salita al Pianello, right in front of Bar Aurelia, a staircase that climbs between the houses to cross Via San Rocco and Via Carcassoni and come out in the initial part of Via San Bernardo. Here you must pay attention and follow the provisional signs (arrows or a red sign) that after a few meters to the right, before the large maritime pine, it points to the left towards a stone staircase that climbs to end under the final part of Via San Bernardo. Here you follow the path to the left continuing a few ups and downs to reach a crossroads: continuing uphill in the woods, on a slightly irregular terrain you will reach the ruins of the ancient church of San Bernardo.

From here on it is no longer possible to go wrong, in fact you continue to climb in a beautiful forest of chestnut and holm oaks for about 1.5km until you cross Case di Besain a group of abandoned cottages surrounded by bands where once the peasants cultivated and set up a market for the exchange of their goods.
Now you have to follow the footpath sign

the path that continues right in front of you and that alternating descents with flat stretches reaches another small nucleus of ruins called Casette, from which you can enjoy a beautiful view.
This is the path that climbs up from the Tuja valley and that now with a steep climb, sometimes steep, goes into the woods to end under the Montallegro cable car station. Here there is a bar and public services.

Now go up towards the Sanctuary of N.S di Montallegro, go beyond it to keep to the left and, without particular difficulty, reach the Passo della Crocetta , where you cross the driveway to find the path that continues towards < em> Pian dei Merli

, offering various panoramic views.
The large lawn is also easily recognizable by the presence of a stone cottage that you have to walk along to then descend towards the hamlet of San Quirico di Assereto .
After crossing a first driveway, you'll meet another one, above the cemetery, which you have to follow, on the right, for a few meters to continue slightly uphill and after crossing a small nucleus of inhabited houses, it becomes a nice path in the wood that allows you to reach Montepegli , remaining higher than the driveway and surrounded by greenery.

Once in Co 'di Montepegli, consisting of some beautiful stone houses (here there is a water tap NOT drinkable ), on the right you can see some rustic steps which invite you to climb the strip above to meet again a track that you follow up to a crossroads, where the writings appear on two stones SQ (San Quirico) and Cian de mazun. Here you have to go down to the left and after a few meters to the right, paying close attention to the provisional signs (ribbons and red points) because some passages are not very evident.

After a first flat stretch you start to climb to reach the place called Fontana du Seggiu which indicates the presence of a beautiful natural spring that does not remain on the path but can be seen by making a short detour to the left. Our itinerary instead continues to the right, to climb next to another rustic, equipped with a gate against the passage of wild boars, and then continue left into the woods and after crossing a dry stream, climb towards the Scoglio dell'Orologio, a highly panoramic position that the farmers of the hamlet once used as a reference to know when it was noon, thanks to a rock that served as a sundial.

Climb uphill towards the ridge for a few meters up to the height of a rustic where at the bottom left you can see a wooden sign indicating the direction for Chignero - Panchina. Although it has recently been reopened and cleaned up by a group of volunteers, this section of the itinerary has no official signposts and has some passages that require some attention.
The arrival to the so-called Bench , with its breathtaking view , repays you for the effort made.

Here you can find the official F.I.E. and you can reach Chigneroin about 20 minutes,
Taking the staircase next to the church you go down between the houses of the village to take the second detour on the right and which leads to the driveway, right in front of the path (without signpost) that leads to the Passo dei Grifoni, where you get there with an initially flat path that then climbs up with some slightly bumpy passages over stones.

Here you go up along the ridge until you find the signs for Passo del Gallo on the left.
Here, too, you must pay close attention to the temporary red signs when, after having covered a nice clear panoramic stretch, you enter the wood, and after a few ups and downs you come out at the benches in the plain of Passo del Gallo.

After a well-deserved break, continue towards Monte Orsena going up for about 400 meters until you meet the path on the left, descending towards San Pietro / Spotà. This part of the route of about 2.5km develops totally in the chestnut wood, in some points when the ground is wet it can be slippery, it is not very well maintained even though it is an official path marked FIE by

which leads in about 45 minutes to the crossroads "Croce di Spotà - San Pietro - Caravaggio - S. Maria".

You go down towards S. Maria following the footpath sign

. The descent is not particularly difficult and in about 40 minutes you will arrive above the motorway and the ruins of S. Tomaso. Going down another hundred meters you will arrive in Via S. Maria, where this itinerary ends.

Look at our path on Google Map 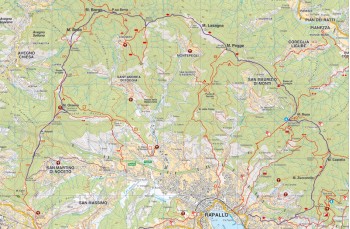