Due to the numerous rescues to hikers, which took place during this summer on this path, we do not recommend walking along this trail, especially on hot and sunny days.
In any case, we remember that the stretch from Batterie to San Fruttuoso is classified EE, or for only Expert Hikers
However, we always recommend that you wear trekking equipment and bring an abundant supply of drinking water.

This route is certainly one of the most suggestive of the Portofino Park, but in some places it is quite challenging. It is therefore advisable to wear shoes suitable for irregular routes and to carry a good amount of drinking water (there are no fountains or water taps), perhaps avoiding the hottest and sunniest days.

The path begins with the road that from the churchyard of San Rocco continues overhanging the sea. After a few minutes, after passing the fork that goes down towards Punta Chiappa, you will pass through Mortola, a small group of very characteristic houses.

Moving away from this village, the path goes into the woods and arrives, after about 20 minutes, at Fornelli.

Going straight on, after a stretch on a false level, there are some ups and downs on irregular but easily walkable rock steps which, leaving the bush, overlooking Punta Chiappa and Camogli.

After about 40 minutes from the departure you will arrive at Batterie, magnificent viewpoint over the gulf, where there is also the Visitor Center "Silvio Somazzi", created to enhance the remains of war artifacts, dating back to the Second World War. Here you can also find the only one drinking water tap, before arriving in San Fruttuoso.

Arriving at Passo del Bacio (it takes its name from a legend according to which two young people in love, in order not to separate as the families would have liked, die by throwing themselves at this point, after a last kiss) the route becomes a bit more challenging because to some points where you have to walk directly on the rock overlooking the sea. The chains helps during these passages, especially in a short stretch where the rock has few points of support for the feet.

The difficulties are rewarded by a breathtaking view of Cala dell'Oro and Punta Torretta and by the immensity of the sea below us.

The path proceed narrow and a bit bumpy and with some ups and downs on rock steps, up to the crossing of a dry stream (the presence of some chains denotes the presence of water at certain times of the year).

Here, paying attention to the signs (the path is not so clearly delineated) and continue on the path that begins to climb. The climb is very steep and tiring and begins with a first very sunny stretch to then go into the woods, reaching in about 40 minutes, the summit named "Costa del Termine". 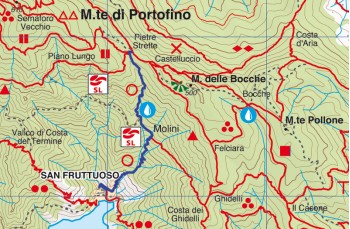 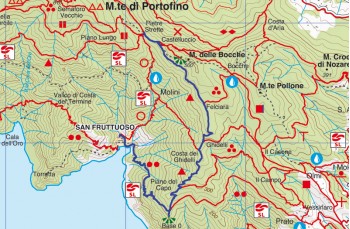 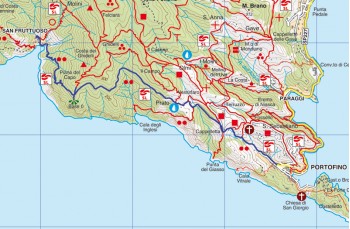